The historic Pinal Cemetery, ca. 1880 to approximately 1920, served the residents of Pinal and the mill workers from Silver King Mine. Following the mine closure in 1888, Pinal was depopulated but the cemetery was still used by the residents of the new copper camp, Superior. With the establishment of Superior’s own cemetery in 1916, use of the Pinal Cemetery was discontinued. 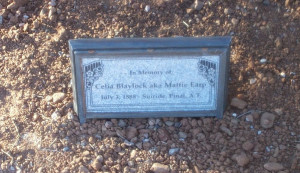 Marker of Mattie Earp’s grave at the Pinal Cemetery. Courtesy of the Tonto National Forest.

However, in the 1990s, the Pinal Cemetery attracted new interest when the Wyatt Earp movies hit the big screen, as Mattie Earp, Wyatt Earp’s second “wife,” was known to be interred there. Between 1995 and 2009 the relatively small cemetery – home to a few dozen gravesites – went from near obscurity to a sought-after destination, and increased visitation greatly impacted the cemetery. From 2009 to the present, the Tonto National Forest, partnering with concerned citizens and preservation organizations, halted the impacts to the Pinal Cemetery, implementing a program of preservation and interpretation.

Steve Germick, an archaeologist with the Tonto National Forest, shared the cemetery preservation efforts at the Arizona Historic Preservation Conference, held in Mesa in June 2013. Here’s an overview of his talk:

How did this new wave of visitors impact the cemetery?

Increased visitation led to trash and vandalism. Vandalism was  largely in the form of “cleaning up” the cemetery by moving rocks and creating graves and marking such “graves,” leaving offerings, particularly artificial flowers, and burial of pets within and adjacent to the cemetery. I’ve also noted several small areas of burning within the cemetery that looked like warming fires, but what they really represented was anyone’s guess. 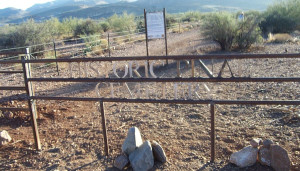 What efforts have been taken to preserve the cemetery?

New fencing and signage have been posted. Our goal was to develop and manage the cemetery as an interpretive site while preserving its historic context and integrity as an archaeological resource. To reach this goal, we removed all illegal, unauthorized markers. The public is welcome to visit the cemetery but visitors should be respectful and not disturb the graves of the pioneers who rest there.

What were some of the challenges of preserving this gravesite?

When an historic site is associated with a particular historic event or personage, the problem of preserving the site as an archaeological resource is more difficult, and that’s what occurred at the Pinal Cemetery.

I don’t believe we would have had half the headaches at the Pinal Cemetery if Mattie Earp hadn’t been buried there. If only regular folks who had led everyday lives for the time were buried there, it would have been known just as the cemetery associated with the historic silver milling town of Pinal. But with an individual associated with such a prominent name as Earp, the cemetery became a destination. 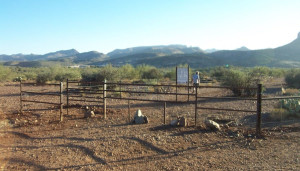 As an archaeologist with the Tonto National Forest, I was able to see first-hand the impacts to the Pinal Cemetery beginning in July 1995 when I discovered that an illegal monument dedicated to Mattie Earp had been constructed. Over the years I watched how this monument grew ever more pretentious until, to the uninformed, it had evolved into her de-facto gravesite. The cemetery itself suffered due to the adulation of a single individual. Finally, in 2009, a man with a portable welder was caught at the cemetery building a rail fence around the monument. Although he removed his metal work, he left behind a number of large river cobbles that had been brought in. One only knows what he had planned for them. The monument was removed in September 2012.

Once the Mattie Earp shrine was removed, the Tonto National Forest was falsely accused of removing her grave marker and all traces of her grave. Fortunately we were able to partner with the True West Preservation Society and the Pioneer Cemetery Association, Inc. to fence and provide signage at the Pinal Cemetery. Vince Murray of Arizona Historical Research coordinated the efforts with the concerned parties and purchased the necessary materials for the project. Vince and I staked a line for the proposed fence in May 2010, and after overcoming glitches with the funding and permitting, the fence line was built in August 2012. Many hands contributed to the successful conclusion of this project including personnel from the Globe Ranger District, Tonto National Forest and a cowboy crew employed by the local Range permitees. Construction of the formal entry, placement of the interpretative sign and the memorial to the memory of Mattie Earp were completed in December of that year.  Formal dedication of the Pinal Cemetery took place on February 13, 2013.

About the Arizona Historic Preservation Conference