Have You Been to the “Valley of the Moon”?

Back in the 1970s, George Phar Legler, a mailman with a big imagination, placed the hobbits, trolls, fairies and even a few gnomes in a peaceful spot in the desert on the city’s outskirts. He used rocks and stones to build towers, castles and little houses for his little people, then he’d put on a hobbit costume and lead children through his garden while telling them gnome stories.

After Legler’s death, his project was designated an Arizona Historic Place and the George Phar Legler Society took it over. The group maintains the property and volunteers dressed as wizards and elves still lead the tours that pass waterfalls, secret passages, and hidden rooms en route to the Tower of Zogog. Some of Legler’s edifices are beginning to show wear and tear, but the Valley of the Moon is still worth a visit. 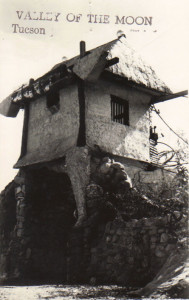