Weather Talk
Home›Weather Talk›How Much Water Does My Swimming Pool Lose Through Evaporation?

How Much Water Does My Swimming Pool Lose Through Evaporation?

Excerpt from Valley 101: A Slightly Skewed Guide to Living in Arizona, a collection of Clay Thompson’s columns for The Arizona Republic. (Originally published August 9, 2001.)

Q: How much water do I lose from my swimming pool through evaporation?

A: This is a question that comes in a lot, evaporation from swimming pools or from Tempe Town Lake. It seems to be preying on the minds of many of you. 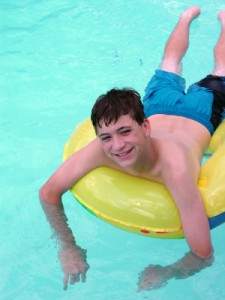 Personally, in terms of swimming pools, I thought last year’s question about how to make chicken soup in your pool was more interesting, but there you have it. If you want evaporation, you’ll get evaporation.

I actually found an equation for this used by the American Society of Heating, Refrigeration and Air-Conditioning Engineers. To wit: “W= (95+0.425 v) (pw-pa)Y, whereWis evaporation rate, lb/h ft2; v is air velocity at water surface, ft/min.; pw is saturation vapor pressure at water temperature, in. Hg; pa is saturation vapor pressure at air dew point, in. Hg; and Y is latent heat at pool temperature, Btu/lb.”

If you think I am going to explain this, much less attempt to work it out, for what I get paid, you are sorely mistaken.

According to the city of Tempe’s web site, water evaporates from open bodies of water in the Valley at a rate of 6.2 acre-feet per acre of surface per year. That’s about 2 million gallons. The annual loss from Town Lake would be around 1,388 acre-feet. An acre-foot is an acre of water 1 foot deep.

I suppose I could extrapolate from that the evaporation rate for a residential pool, but given my math skills, that would be sort of a dubious enterprise.

Instead, I called a bunch of people who sell pool covers, and they said that in the summer a typical residential pool would lose from three-quarters of an inch to an inch of water a day.

I think, but I’m not sure, that you could check this out by floating a bucket of water in your pool for a day and then measuring how much was lost from the bucket. At least that sounds plausible.

If you are worried about the bucket tipping over, you could anchor it with some dead weight. One of my masters, for instance.