Sitting in the Cockpit of Gen. MacArthur’s Personal Aircraft

VALLE – Most people never get the chance to plop their behinds down on a seat that once held the rear end of Gen. Douglas MacArthur, the World War II and Korean War leader. But there’s an opportunity here, in the Planes of Fame Air Museum. One of the planes on display is the huge Lockheed C-121A Constellation that once served as MacArthur’s private carrier during the Koran conflict. 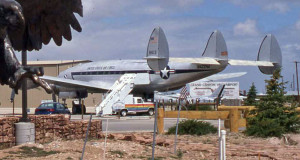 The aircraft, officially named “Bataan” but nicknamed “Connie,” was the general’s personal transport for 17 missions. Their last flight together took MacArthur to San Francisco after President Harry Truman fired him as supreme commander of the allied forces in Korea. The plane was also used by NASA as part of the Apollo space program. It is one of more than 40 aircraft on display at the museum.

Of course, there’s a price to be paid for the honor sitting where the general sat, and it’s in addition to the regular museum entry fee. Only those who pay the extra money are allowed to tour the inside of the plane. But those who don’t pay up still get a good look at the Connie. It’s too big to fit inside the main building so it sits outside.