CLIFTON — The southern portion of Clifton suffered major damage when the San Francisco River overran its banks twice in the 1970s and again in 1983. To remedy that, the Army Corps of Engineers and the State of Arizona developed a levee system to serve as flood control. But the levee had to cross State Route 75, Clifton’s main street. That created a problem. 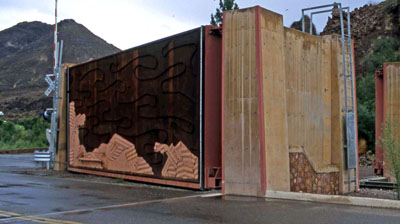 So the agencies authorized construction of a huge gate that would be open most of the time but would automatically close whenever the river runs wild. The levee walls are thick concrete, but the gate is a work of art. It stands about 12 feet tall, measures 25 feet across, and weighs about five tons. The panels of rusted iron and corrugated steel are designed to resemble the mountainous landscape that surrounds the community.

So, does it work?

It has functioned properly during trial runs, but Arizona has been in a severe drought since the mid-1990s so the gate has never been tested under flood conditions.