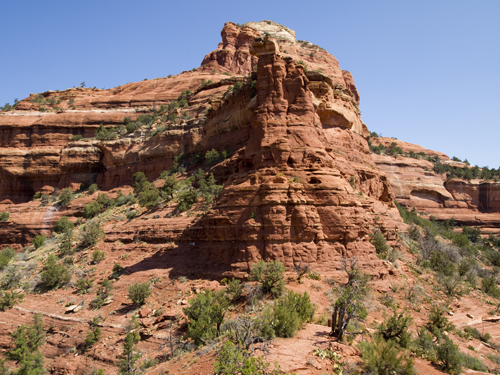 Mike Peach commented that all the streets in west Sedona have one name if you go north — but a different name if you go south. “It might have been that this dual-naming gave the illusion of being a larger community,” Peach wrote.

Also, he says, Pine Drive bears a sign that reads “Dead End.” And Pine Drive dead ends at a cemetery.

Other interesting names are Boynton Canyon and Boynton Canyon Road. They’re anomalies because they’re a corruption of the Boyington family who homesteaded in the canyon where the Enchantment Resort now stands. Elsewhere, he says, Sterling Springs and Sterling Canyon were both named for a rustler/counterfeiter.

The original Oddities entry listed several streets named after Hollywood production companies. This prompted Nanette (no last name given) to write that she lives on Disney Lane, so named because Walt Disney spent several months in the area while his crews shot movies. The crews lived in a trailer that was parked where today’s Disney Lane is.