WILLIAMS — The old steam engines that once chugged and their way across the nation are, for the most part, relics of a bygone era. Most were turned into scrap metal or shipped off to railroad museums. But the Grand Canyon Railway owns two of the old iron behemoths and they both still run. But they don’t use coal and water to create the steam that drives them. 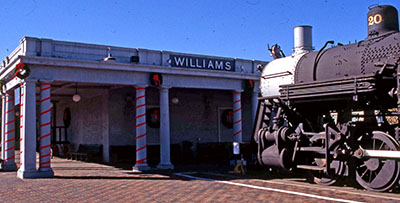 The train to the Grand Canyon is powered by vegetable oil. Photo Credit: Sam Lowe

They use recycled vegetable oil.

The oil is collected from restaurants at the South Rim of the Grand Canyon and from Frito-Lay plants in Phoenix, then filtered and purified by Greener Day, an ecology-oriented enterprise. Once cleansed, the oil is a usable, non-polluting fuel.

So a couple times a year, the oil that once turned taters into fries powers one of the engines on the journey from Williams to the Grand Canyon, while diesel engines still make the vast majority of the daily runs.