NEAR WINSLOW – Just a short drive off I-40 between Flagstaff and Winslow, remnants of a 50,000-year-old collision are visible. “Visible,” I suppose, is an understatement. A massive crater – nearly one mile across and 2.4 miles in circumference – was created here when an asteroid traveling some 26,000 miles-per-hour smashed into the Earth. 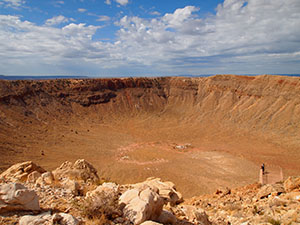 Meteor Crater is reportedly the best-preserved meteorite impact site on the planet, so it’s certainly worth the 6-mile ride from the highway (even if the $16 adult admission seems excessive to view a giant hole in the ground). It’s also referred to as Barringer Crater, named after Daniel Barringer, a mining engineer who is credited as the first person to assert the hole was produced by a meteor.

Barringer was originally interested in the site as a potential source for mining iron in the early 1900s, but his mindset quickly shifted. He spent more than a quarter century chasing his assumptions and searching for the actual meteorite. Turns out, the meteorite underwent total disintegration during the impact through vaporization, melting and fragmentation. Barringer passed away in 1929 prior to this revelation in the scientific community; however, he did live long enough to see his theory of the crater origin gain scientific acceptance. (Some earlier researchers thought the site was of volcanic origin.)

Today, the Meteor Crater site is privately owned by the Barringer family.

A Visitors Center showcases a quick movie and interactive display with all the nitty gritty scientific details of how the crater was formed. There are short self-guided and guided tours.