Carefree Sundial is Among the World’s Largest

CAREFREE – One of the world’s largest sundials anchors a colorful and eclectic desert garden in Carefree. This time-telling sculpture measures 90 feet in diameter and points to the North Star. The metal gnomon (which casts the shadow on the sundial) stands 35 feet and stretches 62 feet. 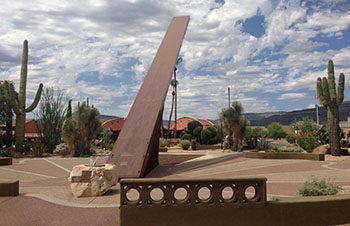 Solar engineer John Yellott and Architect Joe Wong designed the Carefree Sundial in 1959 for Kenyon Turner (K.T.) Palmer, a co-founder of Carefree. It’s made of steel and covered in anodized copper. Local solar time is 27.7 minutes behind Mountain Standard Time, yet the hour markers are adjusted to compensate.

At the time the sundial was constructed, it was considered the second largest sundial in the Western Hemisphere. The world’s largest sundial is reportedly in Jaipur, India. It’s called Samrat Yantra, or “Supreme Instrument.” Another massive sundial – the Singleton Sundial – is located New South Wales, Australia.

The Kiwanas Club of Carefree acquired the sundial in 1976, and then it was gifted to the Town of Carefree in 1988. The sundial sits in the Carefree Desert Gardens, which features a self-guided walking tour, fountains, amphitheater, playground and a meticulously manicured garden with regional cacti and other flora.

The Carefree Sundial and gardens are located on Easy Street in the heart of Carefree’s shopping district, east of Tom Darlington Drive and south of Cave Creek Road.