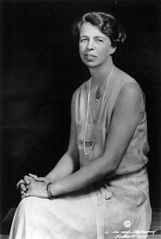 DOUGLAS — The first North American international airport dedication ceremony was held in Douglas in 1933, and it was a non-alcoholic affair. The airport began operations in 1929 and had an international designation because it was connected to the airport in the border city of Agua Prieta, Mexico, by a common runway.

The official dedication took place on June 5, 1933. Eleanor Roosevelt, recently installed as the nation’s first lady, was on a flight to California when she decided to make a last-minute stop in Douglas to perform the ceremony. Because of Prohibition, there was no champagne available so she inaugurated the airfield by smashing a bottle of water against a flagpole.

She spent a mere 20 minutes in town, then resumed her journey to California.