Carob Trees Rank Among The Rankest

Excerpt from Valley 101: A Slightly Skewed Guide to Living in Arizona, a collection of Clay Thompson’s columns for The Arizona Republic. (Originally published November 25, 2001.)

Q: Our neighbor has two carob trees. Every November in the late afternoon or evening, just when I go to relax on my patio, the most horrific odor wafts through the neighborhood. It smells like a laundry bin at the Y. Why? 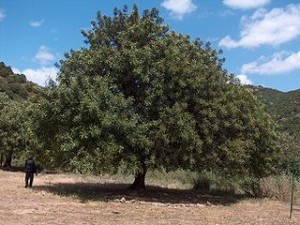 Carob trees are native to the Mediterranean region. Photo Courtesy of Professional Institute of Agriculture and Environment “Cettolini” of Cagliari.

A: You’re living next door to two carob trees? Oh, man you are sooooo out of luck. Various sources I checked used words or phrases such as: “fetid,” “Limburger cheese,” “malodorous,” “rotting carcass” and “unendurable” to describe the smell of carob pods.

What I haven’t been able to figure out is if there is some survival reason for this; if the smell is meant to attract or repel some thing or things.

Aside from the smell, carobs are kind of interesting. They are natives of the Mediterranean area, do fairly well here and are good shade trees.

Our word carat, as in the unit of weight for gems, comes from the word carob because carob seeds were once used for weighing precious stones. Five carob seeds weigh about 1 gram.

In ancient times, carob husks were sold as livestock food or sustenance for the poor, who ate them plain or boiled them into a kind of molasses. Today, of course, it is a chocolate substitute.

Some scholars think that itwas carob husks that John the Baptistwas eating when the Bible speaks of him living in the wilderness and subsisting on “locusts and wild honey.”

Hence, carobs are also known as locust trees or St. John’s bread. When the Prodigal Son was reduced to working as a swineherd and sharing the “husks” the pigs ate, itwas probably carob.

As to how to deal with the smell, I have two plans: leave town every November or buy your neighbor’s house and cut down the trees.

Other than that, as noted above, you are out of luck. And why were you smelling the laundry bin at the Y, anyway?