Requiem for an Old Arizona Heavyweight

KINGMAN — Some of the old cowboy movie stars achieved fame for their ability to ride a horse, whup bad guys or strum the guitar and sing a song. But Andy Devine was not particularly skilled in any of those categories. He was best known for his raspy voice (the result of a childhood accident that damaged his vocal cords), his size (he once weighed in at 358 pounds) and his role as Jingles P. Jones, saddle pal of Wild Bill Hickock as portrayed by Guy Madison on television and in the movies. 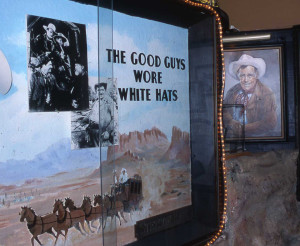 Although born in Flagstaff, Devine is considered a local boy in Kingman because he spent most of his youth here. So they honored him during his life, and still remember him long after his death. A major thoroughfare was renamed Andy Devine Avenue in 1955, and the Kingman Area Chamber of Commerce presents Andy Awards each year to outstanding citizens.

His memory is also kept alive in an exhibit in the Mohave Museum of History and Arts that features the big cowboy star in old photos, movie posters and clippings.  The museum is at 400 West Beale Street.