Excerpt from Valley 101: A Slightly Skewed Guide to Living in Arizona, a collection of Clay Thompson’s columns for The Arizona Republic. (Originally published August 23, 2001.) 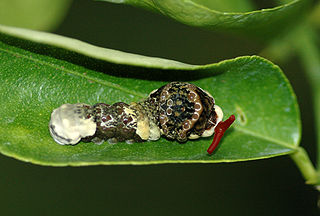 Q: Do you know what an orange dog is?

A: An orange dog is the caterpillar of the giant swallowtail butterfly and feeds exclusively on citrus. The thing about it is that it looks exactly like bird poop. Is that great or what? Further proof that God has a sense of humor.

If you were to find an orange dog on your citrus tree and poke it, it would shoot out a little tongue that gives off some sort of defensive chemical. Of course, unless you’re good at it, you might have to poke a lot of real bird poop before you found an orange dog.

Orange dogs are good eaters and are especially fond of young leaves. However, they also are preyed upon by a number of teeny-tiny parasitic insects, so it’s not likely that they would get around to doing much serious damage to your trees.

The ones that survive turn into giant swallowtails, which are, of course, giant and also very beautiful. They’re about four inches across, yellow and brown, and don’t look a bit like bird poop.