The Red Garter: A Brothel Reborn in Williams

WILLIAMS — From its earliest days until now, the Red Garter has been a labor of love. The early occupants sold love, and the early patrons bought love. Now John Holst takes care of it with loving  hands. 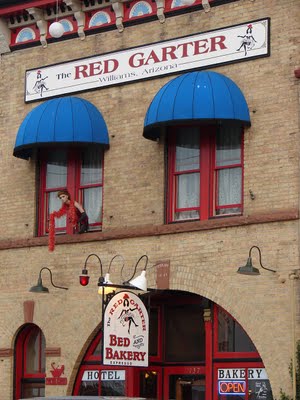 The Red Garter B&B Inn in Williams was once a brothel.

The structure that houses the Red Garter Bed and Bakery was built in 1897 and served as a bordello for more than 40 years. The men drank on the first floor and the girls plied their trade on the second floor, reachable only by a 21-step staircase known as “the cowboy endurance test.” After the law clamped down on that form of diversion, the building became a flophouse, then a restaurant, then a warehouse.

When Holst bought it in 1979, there were 4,000 old tires stacked up inside. Holst quit his regular job and went about converting the building into a bed and breakfast with a bakery where the old saloon used to be. And now it’s inhabited by guests and, according to some of those who stay there, a ghostly apparition named Eve. Holst gets periodic reports that she wears a long dress and can be seen wandering the halls at night. Holst says she’s “harmless and shy.”