A Gun-Totin’ Madonna in Springerville 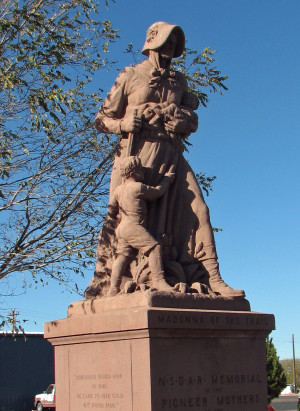 SPRINGERVILLE — Along this community’s main thoroughfare, there stands a statue of a stony-faced woman carrying a baby in her left arm. A bonnet shades her eyes, and an older child clings to her long dress.

She’s known as the “Madonna.” It’s a strange designation since she’s also holding a very un-Madonna-like rifle in her right hand.

The sculpture is one of a dozen dedicated to the spirit of pioneer women in the United States. They were commissioned by the National Society of Daughters of the American Revolution, and one was placed in each of the 12 states that the National Old Trails Road passed through as it crossed the country. Each figure stands ten feet tall and weighs five tons. With the base, the monuments are about 18 feet high.

The artist was August Leimback and the project was funded by donations.