Another Recycled Depot in Douglas

DOUGLAS — Long before there were Home Depots, there were train depots. But now they are, for the most part, relics of a bygone era. Only about 40 of them remain in Arizona and most are being used for something other than their original purpose of sheltering waiting rail passengers. 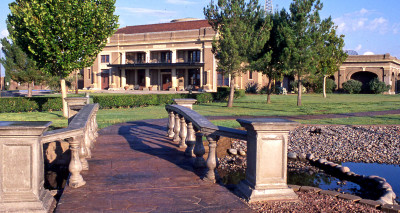 So the buildings, some of them, have survived but put to new uses.

The former Douglas depot, a magnificent old structure, looks like it belongs in Europe, perhaps as a villa in Tuscany or an estate in the English countryside. Instead, it now serves as the city’s police station.

Built in 1914, the depot was abandoned when rail service to Douglas ended. It sat empty for several years before undergoing a major restoration and conversion. Inmates from a nearby prison provided the labor.

Although the interior no longer resembles a railroad depot, it’s worth a visit to look up at the stained-glass ceiling.