Excerpt from Valley 101: A Slightly Skewed Guide to Living in Arizona, a collection of Clay Thompson’s columns for The Arizona Republic. (Originally published February 25, 2001.)

Q: At Encanto Park there is a statue of a man with some test tubes. I can’t find out much about it. Can you help?

A: Indeed we can, dear lady. And here at Valley 101, we are especially pleased to help with this one because, with our scholarly bent, we have a fondness for this statue, which is dedicated to “World Progress Through Scientific Research in the Laboratory.” 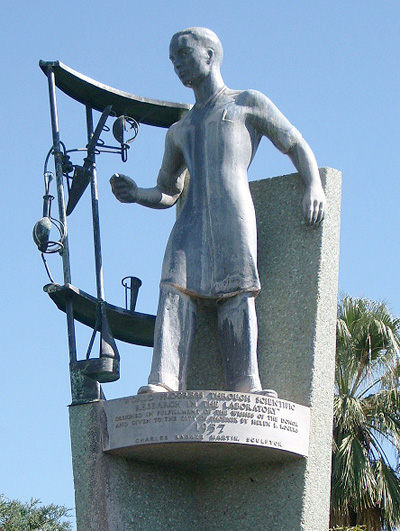 It is near the park’s 15th Avenue entrance and shows a man in a lab coat, his sleeves rolled up. In front of him is an array of laboratory flasks and tubing.

The statue was unveiled in 1958, fulfilling the last wishes of one Helen Rogers, who died an elderly widow in 1952 and left the city $1,500 to erect a monument to scientific progress.

Unfortunately, the Chicago sculptor named in the will to do the job wanted $50,000, and the project languished until 1957. By then,
interest on the bequest had grown $2,700 and Rogers’ trustees and the Phoenix Parks Board commissioned Charles BadgerMartin for the job.

Martin, an illustrator for the city by day and a sculptor by night, arrived in Phoenix in 1945 and lived here until his death in 1976.

He fashioned the statue out of lead, brass and copper. But instead of the common method of casting molten metals, he hammered the sheets of metal into the desired shapes.

Other examples of Martin’s work include a monument to pioneer women at Wesley Bolin Plaza and a bust of composer and pianist Ignace Paderewski at Arizona State University’s Music Library.

We blush bright red to admit that in our reveries, we sometimes wonder if someday a wealthy widowmight leave in her will funds for a modest statue of the Valley 101 staff, but if it is all the same to her, we’ll take the cash.

Excerpt from Valley 101: A Slightly Skewed Guide to Living in Arizona, a collection of Clay Thompson’s columns for The Arizona Republic. (Originally published February 25, 2001.)