In Memory of Mike, at Prescott’s Courthouse Plaza

PRESCOTT — The Courthouse Plaza, downtown Prescott’s centerpiece, is a square block that encompasses an old courthouse, a large gazebo, statues of heroes, and a small bronze plaque that honors the memory of a stray dog. 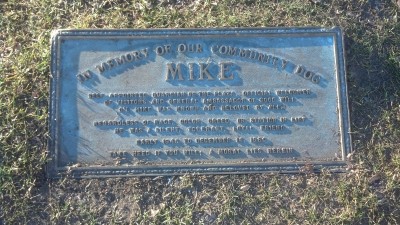 His name was Mike but most people knew him as “the community mutt.” His territory was Whiskey Row and Mike regarded each of the saloons and eateries as his own. He made daily rounds, kept other dogs away, and was rewarded with handouts from bar owners and patrons. A judge once decreed that Mike was an outlaw because he wasn’t licensed. This created a dilemma because Mike didn’t belong to any one person but to the hundreds who flocked to Whiskey Row. It was resolved when local cops raised the money for the tag.

After Mike died in 1960, the Prescott Courier ran his obituary on the front page. A reader suggested a permanent memorial in his honor because of his friendly attitude and high regard for his fellow citizens.

His human friends immediately raised the necessary funds and the plaque was cast, then installed in the northwest corner of the square. It reads, in part: “He was a silent, loyal, tolerant friend. Take heed if you will, a moral lies herein.”