Why Why is Why

WHY — Many years ago, Peggy and Jim Kater homesteaded at the base of  the Little Ajo Mountains near the junction of State Routes 85 and 86. Because the junction formed a Y-intersection, they simply called their place “the Y.” Eventually, the Y attracted so many other residents that the community needed a post office. When postal authorities asked for a town name, the Katers said it should be “Y,” like it always had been. 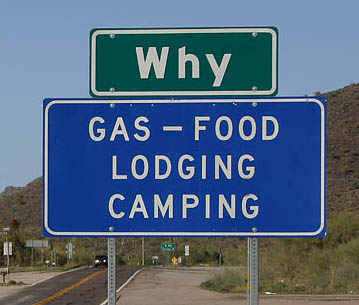 rizona law required all town and city names have at least three letters, so the name was changed to Why because (a) people were always asking why anybody would live in such a remote place and (b) because “Why” rhymes with “Y”.

The Arizona Department of Transportation later removed the old Y-intersection for safety reasons and replaced it with a conventional T-intersection. But Why is still Why, and most everybody who goes there still asks why.