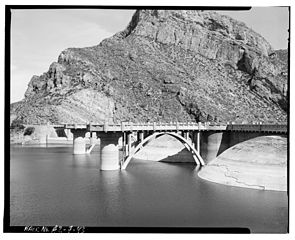 SAN CARLOS RESERVATION — In the 1920s, the federal government decided Arizona needed another dam. Surveyors picked a site on the Reservation, and when the new barrier was completed, they named it Coolidge Dam, after the incumbent president, who actually showed up for the dedication ceremony. Several other dignitaries also took part, including humorist Will Rogers.

Unfortunately for the celebrants, there was very little water in the impoundment area behind the dam because the Gila River, the main water source, had all but dried up due to an extended drought. But the ceremony went ahead anyway. President Coolidge was his taciturn self and didn’t say anything memorable. But when it was Will Rogers’ turn to speak, he looked over the field of weeds and reeds and observed: