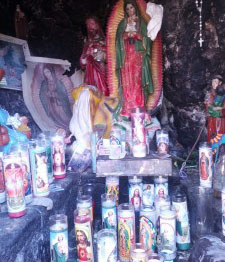 PATAGONIA — Near a small jog in the pavement south of Patagonia, cars pull into a small area where a set of cement stairs leads to a small shrine carved into a large rock. Several candles surround the religious statues inside the grotto. They flicker day and night, illuminating the small space while their smoke turns it a charred black. The shrine has been there since the 1940s. Juan and Juanita Telles, a local couple, built it and vowed to keep candles burning inside in exchange for the safe return of their son, who was fighting in World War II.

The son returned safely, but the family members have since passed away for moved. Despite that, the candles still flicker because the townspeople of Patagonia have taken it upon themselves to continue the devotion. So they tend to the candle lighting every day, making certain the flames never die.

The shrine is just south of Mile Marker 16, about 2.5 miles south of Patagonia on State Route 82.