Getting Close with Nature at Sipe White Mountain Wildlife Area

WHITE MOUNTAINS — People who like to look at, touch and fondle animal skulls will like the Sipe White Mountain Wildlife Area. It’s a secluded place where Native American ruins lie out in the open, and where the elk and antelope wander around like they own the territory. The 1,362-acre piece of land is a former cattle ranch acquired by the Arizona Game and Fish Department, which converted it into a wildlife sanctuary. 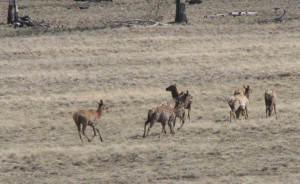 The former ranch house is now a visitor center that contains the usual variety of informational displays, as well as an area where guests can do hands-on examinations of the skulls of creatures that once roamed, and still roam, the area. Good hiking trails lead to surrounding hilltops and Indian ruins in the shadow of Escudilla Mountain.

Picnicking, hiking, wildlife watching and hunting are allowed with the proper permits, but camping isn’t.