A Well-Traveled Dinosaur in Holbrook 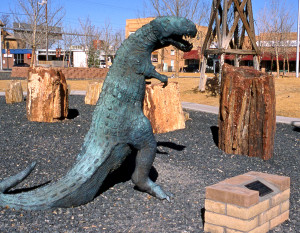 HOLBROOK — A bronze statue of a dinosaur stands almost forlornly in Living West Park here. How it got there is an interesting story. It began in 1997 when the Lundeen family bought the sculpture in New York with the intention of converting it into an outdoor shower near the swimming pool at the home they were building in Fountain Hills.

The statue was shipped to Arizona, where it was stored until the house was finished. But when it came time to move the five-ton bronze, the Lundeens discovered that the crane boom was too short to install it where they wanted it, so they abandoned the idea. Then they were faced with the problem of disposing of an unwanted bronze dinosaur.

The family had stopped at Holbrook several times earlier, and had noticed the large collection of dinosaur statues along the streets. So they opted to donate it to the city, which readily accepted the offer, then sent a big truck and a crew of 20 to retrieve it and bring it to its new home.