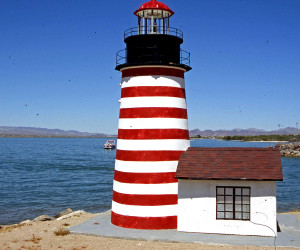 LAKE HAVASU CITY — Although it’s in the desert, many miles from any ocean, Lake Havasu City has something in common with the rocky coastlines of New England and the shores of the American West Coast. They all have lighthouses. The major difference is that those in and around Lake Havasu City are half-scale models. Built and paid for by local residents, each lighthouse is patterned after an existing structure. The project started in 2002 under the guidance of Bob Keller, a retired real estate agent who constructed one lighthouse all by himself. Standing guard over the Colorado River and Lake Havasu, each mini-lighthouse has a rotating beacon, and some are used as channel markers to guide the small watercrafts that skim across the water after dark.

The project is ongoing, with a long-range plan of at last 25 lighthouses erected to complement the London Bridge, the city’s main tourist attraction. For more, go to Light House Club.