Phoenix Freeway Pots Cause a Stir

PHOENIX — The official name of the art project is “Wall Cycle to Ocotillo,” but to most, they’re “the Freeway Pots” and they caused quite a fuss when they were installed back in 1992, when the city laid out $474,000 for an arts project designed to enhance the Squaw Peak Parkway (since renamed the Piestewa Parkway). 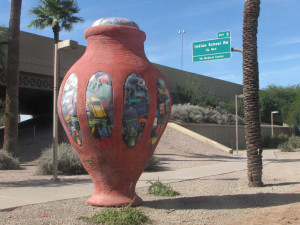 It was the city’s first attempt at highway beautification, but it almost backfired because it consisted of 35 pots. Some were big, some were little, and some looked like teapots and flower vases. The public ridiculed the design, the price tag and the selection of out-of-state artists to create the pieces. One anonymous critic placed a toilet bowl that had been painted gold on top of a wall to mock one pot that resembled a commode. The backlash forced the Phoenix City Council to change it policy on public art, adding emphasis to in-state artists and allowing more public input on art selection.

But the pots, made of polychrome concrete and painted steel, are still there, but time and vandals are slowly reducing their artistic worth.