The Story Behind Salome’s Fighting Frogs

SALOME — The Salome High School teams are probably the only athletes in the country nicknamed the Fighting Frogs. It’s a tribute to a legendary frog that never learned how to swim. 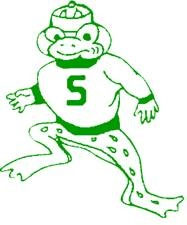 The non-aquatic amphibian was the brainchild of Dick Wick Hall, a humorist and country philosopher who came to Salome early in the twentieth century and gave the community its name. He also operated a newspaper in which he published his wild versions of life in the West.

The frog was one of his tall tales. In Hall’s tongue-in-cheek account, the frog was seven years old but couldn’t swim because it had never seen rain or even a pond. The unfortunate creature had to carry a canteen on its back to keep itself green, and he once chased a dust storm for miles because he thought it was a rain cloud.

Hall died in 1926 but his frog lives on, not only at the high school but across the community. Frogs are prominent figures in local advertising and frog statues are hot items among the tourists. But there are still very few real frogs in Salome, probably because it gets less than seven inches of rain per year, so it’s no place for a self-respecting hopper.