The Story of Teresa Urrea, Mexican Healer and Miracle Worker

CLIFTON — In one corner of the Clifton Cemetery, an unmarked grave silently braves the blistering sun, surrounded by wrought iron fencing. It houses the remains of Teresa Urrea. She is mostly forgotten today, but in her lifetime she was considered a saint by many and a rabble rouser by others. 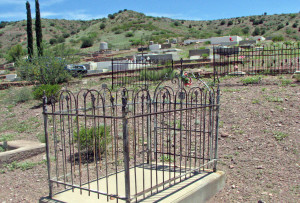 She was born in Mexico in 1873, the illegitimate daughter of a rancher and a young Yavapai Indian. During her formative years, she was tutored by a woman healer who convinced her she had the power to cure the sick. But she fell ill and went into a catatonic state and was considered dead. But as relatives prepared the funeral, she suddenly sat up in her coffin. She said that as she lay in a coma, the Blessed Virgin instructed her to heal the sick. So she became a miracle worker whose fame spread across Mexico. This bothered Mexican authorities and they ordered out of the country, and she relocated in Clifton.

She then hooked up with a national organization that wanted to use her as a sort of sideshow celebrity but when she found out their purpose, she broke the contact and returned to Clifton, where she died in 1906. Today the sun rises and sets over an unmarked grave that only a few determined come to visit.

To learn more about Teresa Urrea, check out Mysteries and Legends of Arizona: True Stories of the Unsolved and Unexplained

, written by me and published by Globe Pequot.