The Return of the Iconic Diving Lady in Mesa 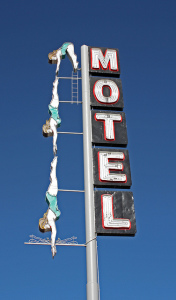 MESA — For more than a half-century, the Diving Lady was a splashy neon icon along US 60. But her glory days apparently ended in 2010 when a windstorm knocked her off her board, shattering the neon tubes that had flickered on and off as she performed her three-stage dive for decades. She beckoned drivers who passed by the Starlite Motel until the wind toppled the 78-foot pole that supported her, so her last dive was to unyielding pavement in a parking lot.

But news of her ill fortune kindled a recovery effort. Within weeks, the Mesa Preservation Foundation began raising the estimated $100,000 required to bring the lady back to her kind of life. The work paid off. All the neon tubes were restored, the motel sign was put back on its pole, and she lady (or three ladies) was put back in her (or their) original place in early 2013.

Those interested in multi-stage neon aquatics can watch her nightly dives at the motel, 2710 E. Main in Mesa.