There’s No Bull in Bullhead City 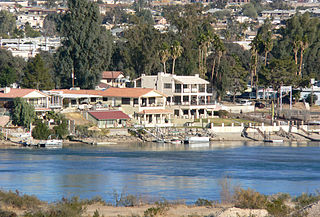 BULLHEAD CITY — The reason behind this city’s rather uncommon name is just a vague memory in the minds of old timers. Years ago, it was just a private development along the Colorado River in Mohave County, occupied by a gas station and a few houses. A large stone formation that, when viewed from the proper angle, resembled a horned bull sat in the river and became an important symbol for the area. So when it came time to pick a name for the growing community, the bull rock as an obvious choice.

But in the 1930s, the Bureau of Reclamation built Parker Dam, which backed up the Colorado River’s waters to form Lake Havasu. When the dam was completed, the waters it held back covered the large formation known as Bullhead Rock. So now the namesake of Bullhead City lies beneath the lake, and there’s no way of rescuing it. Several ideas about saving it pop up occasionally but they’re passed off as bar talk because they involve scuba divers, explosives and draining the lake. Few, if any, get past the third round of drinks.