PIPE SPRING NATIONAL MONUMENT — William Hamblin, also known as “Gunlock Bill,” was a sharpshooter who arrived in the area with an advance party in 1858. Hamblin’s ability with a rifle was a prime source of income for him and his associates, who wagered that he could shoot a hole through a kerchief from 50 yards away. He hit the target, but the bullet didn’t make a hole because the cloth merely gave way. 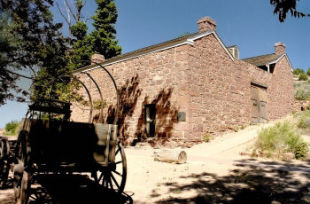 Upset by the apparent failure, but determined to prove his marksmanship, Hamblin bet he could shoot the bottom out of another man’s pipe. The pipe’s owner, a sensible man, said he wouldn’t clench the pipe between his teeth while Hamblin shot at it, but did agree to set it on a rock. Hamblin fired once and blew the bottom off. As a result, the place became known as Pipe Spring. In 1932, Pipe Spring National Monument was set aside by the federal government.