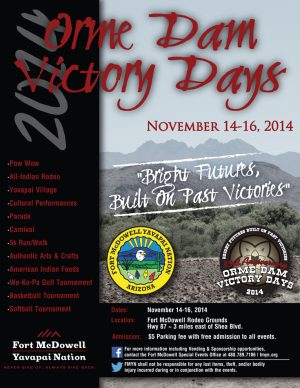 FORT McDOWELL RESERVATION — As a rule, annual celebrations are held to observe some historic remembrance, great feat or outstanding deed that occurred on a particular date years ago. But the Fort McDowell Yavapai Nation puts on Orme Dam Victory Days every November because Orme Dam never happened.

The dam, proposed as part of the Central Arizona Project, was intended to act as a flood control and storage dam at the confluence of the Verde and Salt Rivers near the reservation’s southern border. It would have flooded more than 15,000 acres, almost half the nation’s land.

In return, the tribe was to receive about one-sixth of that acreage in irrigated land. Understandably, the Yavapais voted not to sell the land to the federal government and the fight was on.

It lasted about five years, and the Yavapai tribe emerged victorious when Interior Secretary James Watt announced in November 1981 that the project had been abandoned.