The Legend of How Eloy Got Its Name

ELOY — Sometimes, a legend is to good to let die, even though there’s nothing to support it as truth. One of them is the story of how Eloy got its name. 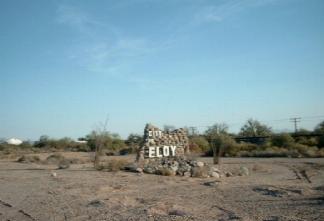 According to “Arizona Place Names” by Will Barnes, the area was named Eloy when a railroad was established but the reasons for the designation were unclear. Later, developers bought some of the land and subdivided an area and named it Cotton City. An application for a post office in Cotton City was rejected because the railroad was already using the name Eloy and since the railroad would carry the mail, Eloy became official.

But legend tells it another way. According to those who tell and retell the story, a man associated with the railroad took one look at the barren desert surrounding the area and named it “Eloi,” supposedly the Spanish pronounciation of “Eli,” as in the Biblical quotation of “Eli, Eli, lama sabachthani?” (“My God, my God, why hast though forsaken me?”)

There appears to be no basis for the story, but the legend persists, probably because it’s more colorful than any of the other behind-the-name scenarios.