The Legend of Apache Cave 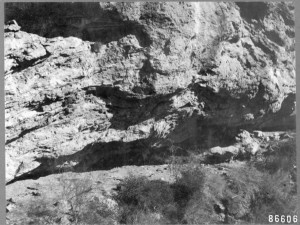 Skeleton Cave, or Apache Cave, in the Salt River Canyon. Courtesy of the US Forest Service.

On Dec. 27, 1872, Army troops trapped a group of Yavapai Apaches who had taken refuge in a cave carved into a hillside located in the Salt River Canyon. The soldiers began firing from below. Upset by the wails of women and children wounded as the bullets ricocheted off the cave’s roof, Maj. William Brown ordered a cease fire so the Indians could surrender. But instead, they began a death chant and about 20 males charged out of the cave into the withering fire of the soldiers. Seven were killed; the rest retreated.

Meanwhile, another contingent of soldiers approached the battle scene from above. That group’s officers ordered two soldiers to make harnesses from the suspenders of others, then lower themselves over the precipice and fire directly into the cave while other troopers rolled boulders down onto the Indians who were attempting to flee. Maj. Brown then ordered an end to the offensive and this time, everything was quiet.

When the soldiers entered the cave, they found 30 survivors who were taken captive. The bodies of the dead were left in the cave, which today is also known as Skeleton or Skull Cave.