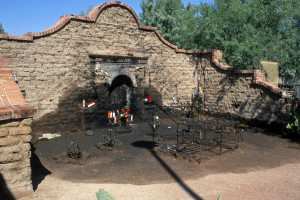 People burn candles at El Tiradito with the hope of a wish being granted. Photo Credit: Sam Lowe

TUCSON — In the heart of the city sits El Tiradito, an adobe wall that recalls a tragic love affair. There are several stories about its origins, but the most popular involves an ill-fated love affair between Juan Olivera and his mother-in-law. When caught in an amorous act by his father-in-law, Oliver was killed on the spot in 1880. But because he had sinned, he could not be laid to rest in consecrated ground so he was buried where he fell.

Friends and relatives lit candles on the spot and prayed for his redemption. Over the years, it became a shrine for parents worried about errant daughters. Later, the faithful adopted a custom that anyone could light a candle and make a wish, and if the candle burned to its base or burned through the night, the wish would be granted. The practice continues, and the site is now blackened from all the candle smoke.

El Tiradito, probably the only shrine in the world dedicated to a sinner, is located on Main Avenue between Cushing and Simpson streets.