Arizona Oddities is proud to welcome a new guide! Marshall Shore, the “Hip Historian,” is the latest contributor to the site. He will be sharing unique and quirky stories about some of the best-known and little-known people who reign from the state. Please join us in welcoming Marshall. Here, he shares a bit about himself:

Day job: As the Hip Historian, my passion is uncovering the weird, the wonderful and the obscure treasures from our past: the semi-forgotten people, places and events that have made us who we are today. I use storytelling magic found film footage, old photographs, ephemera and artifacts to bring our state’s heritage to life in entertaining and educational presentations, such as lectures, tours and a series of postcards. More information can be found at marshallshore.com.

I also work at a place that has quite a history, The Clarendon Hotel in Phoenix. 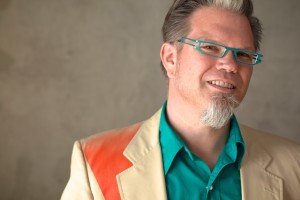 Hometown: I grew up in Indiana in a small farming community of 25 people called Odell. I completed my undergraduate degree at nearby Purdue and earned a Masters of Library Science at Indiana University. From there, I headed to New York City where I was a librarian for almost a decade. I then moved to the West for adventure.

Current city: Phoenix. When I first move to Phoenix, I wanted to find a mid-50s ranch house that was as close to original condition as possible, and near the light rail. I found what I was seeking and now live in a fabulous 1956 ranch that was promptly painted sea foam and cantaloupe. The house continues to be a retro time capsule.

What makes Phoenix special? When moving here many folks said there was “no history.” Not so! There is a ton of history, and more than just about Wild West – the birth of Americana.

Experience with Arizona history, art and culture: I began working just South of Downtown Phoenix when I first move here, and I became immersed in a community teeming with rich oral tradition. This sparked my curiosity to explore neighboring communities and examine their history as well.

Favorite Arizona weekend getaway: Cottonwood. This town is filled with history that has redefined itself over the last few years. A downtown lined with historic buildings and steeped in booze history, which includes Al Capone’s signature on the old jail house wall next to the tasting rooms for many Arizona wineries.

Favorite restaurant: Durant’s in Phoenix. The steakhouse tops my list, even as a vegetarian. As a vegetarian, I must include that they do make their own veggie burger. Oh, the history that is inside those walls! There is movie that will be filming in the spring called “Durant’s Never Closes.”

Favorite Arizona legend or icon: Rusty Warren, who was a comedian/performer here in the Valley at a piano bar called the Pomp Room, circa 50s-60s. She lived in Central Phoenix and hit it big with a song titled “Knockers Up.” She then moved to Paradise Valley into what she called “the house that knockers built.” She is currently readying her paperwork for the Library of Congress being called the “Mother of the Sexual Revolution!”

Best place to watch a sunset: The Clarendon Hotel’s rooftop is the best place in town to watch the sunset. You see the sun setting in the west with silhouettes of palm trees and the colors also reflected behind you in the high-rise buildings.

Where do you take out-of-town visitors? We hop on light rail and head to Downtown Phoenix to highlight two buildings that many folks are aware of, but don’t realize the significance. The Westward Ho was featured prominently in the 1998 version of Psycho, but many think that it was also spotlighted in Hitchcock’s 1960 classic. We then take a short walk to the Jefferson Hotel/Barrister building, which is zoomed in on Janet Leigh’s apartment.