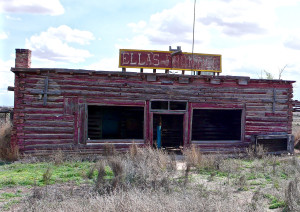 Ella’s Frontier Trading Post has been abandoned since the 1980s. Photo by Marshall Shore.

West of Joseph City on the south side of what once was the iconic Mother Road Route 66, sits Ella’s Frontier Trading Post, abandoned  since the mid 1980s when owner Ella Blackwell passed away. The building looks like it’s constructed out of telephone poles, because it was. Built by Fredrick “San Diego” Rawson, it once housed Navajo Indians who made jewelry and blankets. The building was later sold to Don Lorenzo Hubbell (of the Hubbell Trading Post in Ganado) and then to a Hawaiian band leader and his wife Ella. It was then acquired by Ella in 1955 as part of a divorce settlement, and she operated it until her death. Ella, a former Julliard student, was known to be eccentric. She had a piano in the store that she played for the entertainment of travelers.