JOSEPH CITY — The folks at Geronimo Indian Store don’t have to worry about anybody walking off with their prize attraction because most people aren’t capable of picking up a 45-ton piece of petrified wood. 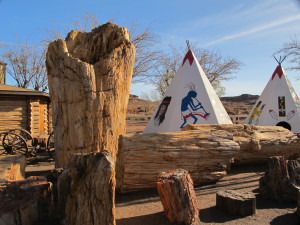 Even if they had a crane or a bulldozer, that chunk of rock ain’t going no place.

Billed as the “world’s largest petrified tree,” it was dug up from a gravel pit behind the tourist/souvenir shop by Carl Kempton, who owned the place at the time. He moved it to his parking lot and buried part of it in a hole, then left the rest aboveground so visitors could have their pictures taken beside it while pretending to lift it. Or something similar.

The store and the old log are at the Gernimo exit off Interstate 40, about five miles west of Holbrook.