Santa Claus, Ariz. is Up for Sale 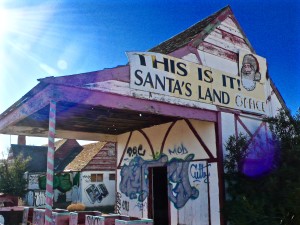 The old Santa Claus village is up for sale. Photo by Marshall Shore.

Ever wanted to own a ghost town? Now you can! Santa Claus – a modern Arizona ghost town – is up for sale.

Santa Claus is located about 14 miles northwest of Kingman along U.S. Route 93. The Santa-theme village opened in the late 1930s and businesses operated here until 1995. By the early 40s, Santa Claus had become a thriving tourist destination attracting visitors from Las Vegas, Phoenix and Hoover Dam. It even hosted a real Santa that could take kids’ Christmas list year round.

The most well-known part of Santa Claus was the original Kit Carson Guest House, which later became the Santa Claus Inn, and then the Christmas Tree Inn. Duncan Hines, a famous food critic, described the inn as one of the best in the region, and sci-fi writer Robert Heinlein wrote a short story about a meal served there by Mrs. Claus. Actress Jane Russell has reportedly dined there as well.

Today, only a few boarded up buildings remain and little that attests to the many happy smiles that Santa Claus placed on the face of adults and kids. However, there is a chance this ghost town could see a rebirth. It’s up for sale, and someone new could own this slice of Arizona history. To learn more, visit GoldWaterLand.com.