Protecting the Protector of the Casa Grande Ruins National Monument

COOLIDGE – The center of attraction at the Casa Grande Ruins National Monument is a four-story caliche and adobe structure that was built around AD 1300. The building has held up fairly well, considering it sat outdoors under the blistering sun and limited rainfall for more than seven centuries before anyone decided it was worth saving. 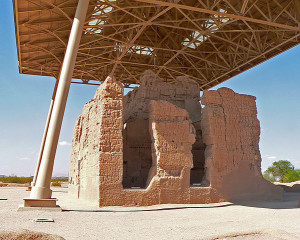 The federal government, after declaring the ruins a national monument, erected a huge steel roof over the original building in 1932 at a cost of $28,000. While the roof protects the structure, it is also exposed to the elements, so it needs upkeep. And that creates a problem.

Over the years, the roof itself was placed on the National Register of Historic Places, which makes it subject to many of the same rules as the ruins when it comes to repair and updates. So when the roof needed patching a few years ago, the procedure required special equipment and materials. For example, the solder used in the original construction was no longer manufactured so the repair crews had to get special permission to use a substitute.