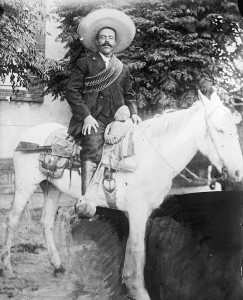 DOUGLAS – The lobby of the Gadsden looks like it was transported from somewhere in Europe. It features an elegant white marble staircase, four soaring marble columns topped by capitals decorated in fourteen karat gold leaf, and a balcony that surrounds the entire second story.

But a lot of people who go there look for the flaw. One of the marble steps is chipped.

According to local folklore, the infamous Mexican bandit Pancho Villa once rode his horse to the top of the staircase, leaving a chip on the seventh step. There’s no one alive today who can verbally support the story, but people have been telling it for more than a century, which gives it some credibility because nobody wants to accuse those Douglas old timers of fabricating the truth.

Villa had been fighting in the Agua Prieta area just across the Arizona border in Mexico when the hotel was built in 1907. And there are still a few Douglas residents who claim to be descendants of the people who actually saw the incident.