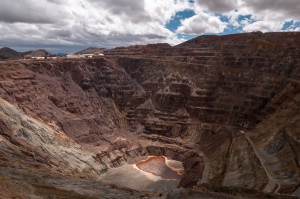 BISBEE – If you’ve ever used a kitchen spoon to dig a hole in your back yard, or wondered how long it would take you to shovel your way to China, the Lavender Pit may be your personal mecca. It’s a big hole in the ground, dug over a 23-year span as part of a copper mining operation. It’s wider than anything you ever scooped out with Mom’s best soup ladle, and deeper than anything you’ve ever imagined while burying your secret money cache out behind the garage.

The pit is humongous – 1,000 feet deep, three-quarters of a mile wide, a mile-and-a-half long, and covering 600 acres. From 1951, when the digging started, until 1974, when the operation shut down, men and machines dug 375 million tons of material out of it. That figure included 94 million tons of ore, 108 million tons of leach material, and 173 million tons of waste rock.

The pit, named after former Phelps Dodge official Harrison Morton Lavender Sr., was also responsible for obliterating a town. Before mining operations began, the 191 homes and businesses that made up the community of Lowell had to be relocated.