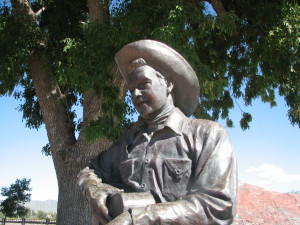 WILLCOX – Rex Allen, one of the last singing cowboy movie stars, was born and raised in Willcox and never forgot his roots. After a successful run as a white-hatted movie and television hero, Allen returned to the city and spent the majority of his remaining years there.

In 1991, the Rex Allen Museum board of directors commissioned Tucson artist Buck McCain to create a life-sized bronze statue of the hometown hero. As a special feature, McCain inserted a bronze heart into the chest cavity of the sculpture. He did it because Allen made the request so his heart would always remain in Willcox.

Allen died in 1999. The statue containing his heart stands tall in Railroad Park across the street from the museum.