The Shooting of James Hale in Springerville 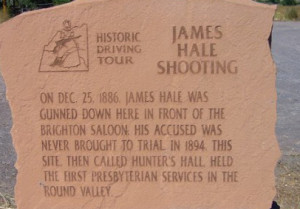 SPRINGERVILLE – Although a model of peace and quiet today, this town was once considered one of the worst in the Old West. Take the unfortunate demise of James Hale as an example. On Dec. 25, 1886, Hale was shot to death in front of a local saloon. The area newspaper called it “reckless gunfire,” but witnesses disagreed with the report.

They said Hale was gunned down by Billy Evans, also known as Jack Diamond and Jack Timberline. Evans was accompanied by five or six outlaw pals who surrounded Hale, then knocked him to the ground. As he lay there, Evans delivered the fatal shot because, he said, he wanted to see if a bullet would go through a Mormon.

Five months later, Evans and another bandit were shot and killed in a narrow canyon near the Blue River after stealing several horses.