Turning Cannons into Light Along the London Bridge 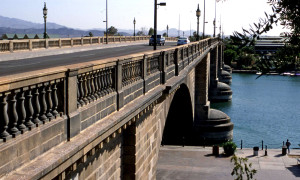 LAKE HAVASU CITY – Most Arizonans already know the story behind the London Bridge here – how it was purchased in London by the McCulloch Corporation, dismantled on site and every block marked, then shipped to this city on the Colorado River, where it was reassembled, block by block, in 1971. Now it spans a diverted stretch of the river and has become a premier tourist attraction.

But most don’t know the story behind the lamps that were shipped along with the blocks as part of the deal. The lamps were emplaced on the bridge in 1831. They were made from the melted-down cannons of Napoleon Bonaparte’s defeated army.