That Was One Big Sarah With a Dynamic Past 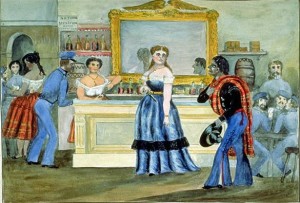 YUMA – Sarah Bowman was a large woman. So large that she was nicknamed “the Great Western,” after a huge ocean-going steamship known throughout the country. She was a camp follower who hooked up with, and married, several soldiers so she could travel with the Army. After her first marriage, she became the first prostitute known to work the streets of El Paso.

After that marriage failed for undeclared reasons, she wed again and fought in the Mexican-American War alongside her new groom, who was killed in battle. Using her $15,000 death benefit as dowry, Sarah had little trouble finding another mate, also an Army man. Thus married, she was able to return to the United States as a soldier’s wife. But once back on U.S. soil, she soon became unmarried. Again.

She arrived at Fort Yuma in 1853 with her fourth, and last, husband and built the first adobe house in Yuma. The house was converted into a commercial building that served as a restaurant, saloon and brothel which fostered a need for more working girls to service the troops, which made “the Great Western” Yuma’s first madam.

Despite her reputation, Sarah was loved and respected in Yuma, and when she died from a spider bite in 1866, she was buried with full military honors.