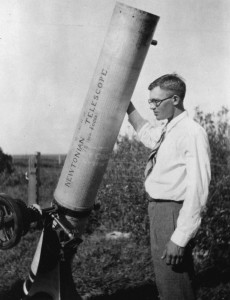 FLAGSTAFF – In early 2015, Clyde Tombaugh passed within 7,800 miles of something he discovered 85 years earlier. Tombaugh’s ashes are flying on NASA’s New Horizon spacecraft on humanity’s first journey to Pluto, which Tombaugh discovered in 1930.

He was working at the Lowell Observatory in Flagstaff at the time, a young astronomer in his early 20s with no college degree. His discovery was hailed as the ninth planet in our solar system and was named Pluto. It was still called that when New Horizons was launched from Cape Canaveral on Jan. 19, 2006, but was demoted to dwarf planet a few months later.

Tombaugh died in 1997; his widow and two children offered NASA an ounce of his ashes for the historic space endeavor.