Once the Territorial Capital of Arizona, Prescott is brimming with colorful history. At one time populated by lawmen, gunslingers and gamblers prone to big bets, it was one such wager that gives the Ruffner-Wakelin Funeral Home its intriguing backstory. 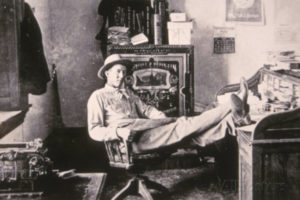 George Ruffner served as Yavapai County Sheriff from 1895 to 1898.

As the story goes, George Ruffner, who served as Yavapai County Sheriff from 1895 to 1898, won the business from the city’s undertaker in a gambling bet. The business stayed in the Ruffner family until 1978, when it purchased by Fred Wakelin. Wakelin grew the business and ran it until his death four years ago, when operations were taken over by a fiduciary. Loyal employees remained during that time of transition, and are now pleased that new owners have recently taken over day-to-day operations.

Still housed in its original Victorian-era structure, Prescott’s longest-running business is poised to continue helping families honor their loved ones for years to come.