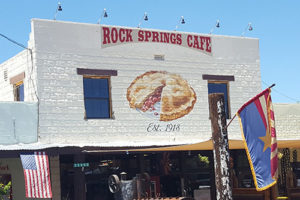 Less than an hour north of downtown Phoenix, just off I-17 at exit 242 in Black Canyon City, you’ll find the Rock Springs Café. Known as the place to go for some of the best pie you’ll ever eat, this Arizona institution began in 1918 as a general store for travelers, miners and local ranchers. Over the years, it expanded to include a hotel, restaurant and perhaps even served as a speakeasy during Prohibition, based on what appears to be a copper still discovered in the attic.

Now known for its dining and live entertainment, it’s become a popular pit stop for Phoenicians traveling between the Valley and Northern Arizona hot spots such as Sedona, Flagstaff and Prescott.

No visit to the Rock Springs Café is complete without a piece of — or perhaps, even a whole — pie. In fact, they’re well-known for originating the practice of “Pie Diving,” in which a whole pie is placed in the center of the table and everyone grabs a fork and digs in, no plates required.

When you visit the café, take a moment to imagine what the trip from Phoenix to the north country must have been like for the territory’s earliest residents as you savor this slice of Arizona history.