Casey Moore’s Haunted by Past Residents? 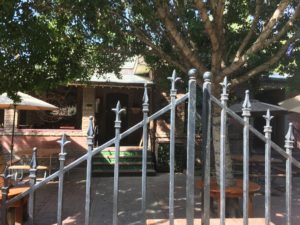 Case Moore’s, near 9th and Ash in Tempe, is believed to be haunted.

Barely more than a stone’s throw from Arizona State University in Tempe, you’ll find Casey Moore’s Oyster House, an Irish pub popular with students, faculty and locals alike. Built more than 105 years ago by William Moeur (brother of Benjamin Baker Moeur, Arizona’s fourth governor), the home has served as a private residence, boarding house, and if rumors are to be believed, a bordello.

With the building’s colorful history, it’s no surprise that many of its former residents were reluctant to leave and still routinely make their presence known. Neighbors have reported seeing a handsomely-dressed couple, believed to be William and his wife Mary, dancing in the upstairs bedrooms in the wee hours of the morning. Other indications of ghostly residence include forks flying off tables, items disappearing and showing up in other rooms, and hanging light fixtures swinging without being touched. 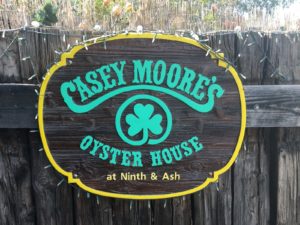 But perhaps the most convincing case are the regular sightings of a beautiful young woman with light eyes and black hair, most often seen hovering on the stairs or in the kitchen area. Many believe she’s the ghost of an ASU student who lived in the boarding house and was murdered by an overzealous would-be suitor who refused to take “no” for an answer.

And If you think the sightings are simply the result of bleary-eyed patrons who’ve enjoyed one too many, long-time restaurant employees and managers have each had their own encounters and declare these restless spirits to be part of the Casey Moore’s family.