Located on the corner of Gurley and Marina Streets in Prescott, the Hassayampa Inn is a four-story hotel that was built in 1927 as a destination for wealthy travelers looking to escape the summer heat in Phoenix. It remains one of Prescott’s busiest hotels, but there’s one guest who checked in who has yet to check out. 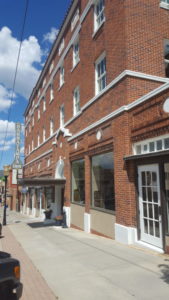 As the story goes, a young couple chose the Inn as their honeymoon destination shortly after the hotel’s opening. They booked the Grand Balcony Suite — Room 426 — on the fourth floor and checked in ready for a night of romance. After they arrived, the husband left to buy a pack of cigarettes … and never returned. His young bride, Faith, was inconsolable, and spent the next three days waiting for him. On the fourth day she was discovered hanging from the balcony that faced Gurley Street.

In the years since, both hotel staff and guests alike have reported seeing and feeling Faith’s presence throughout the hotel in numerous ways. These include burners being blown out in the kitchen, radios, televisions, and faucets being turning on spontaneously, and appearing at the foot of guests’ beds weeping and holding her bridal bouquet.

Locals and visitors have accepted Faith as a permanent guest of the Hassayampa Inn, where she stays true to her name and never gives up on the hope of reuniting with her lost love.